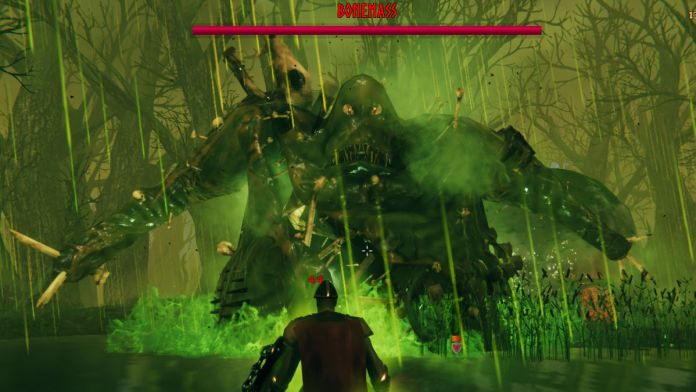 In the world of Valheim, you must fight and survive your way through a harsh world full of dangerous beasts. The major bosses are known as the Forsaken, and they’re challenging fights. The third Forsaken is called Bonemass, and it’s a living pile of toxic sludge and skeletal remains. Today, we’ll show you how to summon and beat Bonemass in our Valheim boss guide!

Like the other Forsaken, you’ll need to find Bonemass’ Forsaken Altar before you can even attempt to fight him. Bonemass spawns in the Swamp biome, so you can either wander around aimlessly and hope you run into the altar, or you can have it marked on your map.

You’ll want to keep an eye out for a Vegvisir while you’re exploring the Swamps. You’ll find them sometimes next to ruined towers, and reading them will reveal the location of a Forsake Altar.

If you can’t find one, try searching for a Sunken Crypt entrance. They’re stone structures with iron gates that you can find scattered throughout the Swamps. Sunken Crypts are guaranteed to have a Vegvisir within.

However, in order to unlock the iron gates, you’ll need a Swamp Key. This means that you need to have defeated The Elder beforehand.

The Sunken Crypts are full of Blobs, so be wary of poison. Bringing a Poison Resistance Mead with you isn’t a bad idea, and you’ll also need a pickaxe to dig your way through the muddy scrap piles.

Related | How to Spawn Items in Valheim – Console Commands List

Now that you know where Bonemass’ Forsaken Altar is, you’ll need to prepare. You need at least 10 Withering Bones to summon Bonemass, and they’re found by mining the muddy scrap piles inside the Sunken Crypts, and searching chests within Swamps.

Bonemass, like the Blobs and Oozers before it, attacks with poisonous gas, so you’ll want to pack some Poison Resistance Meads. You’ll also be fighting in the Swamp, where it’s always raining, so fill up on some stamina boosting food to counter the Wet debuff.

Bonemass is most weak to blunt damage, so you’ll want to bring a club weapon with you. The Iron or Bronze Mace and Iron Sledge are great options for this battle.

Offer the Withering Bones to the Boiling Death, and Bonemass will spawn shortly. Bonemass has three main attacks:

In general, you want to stick close to Bonemass and get in as many hits as you can. Block, parry, or dodge its swing attacks, and run away from the toxic cloud if it throws up.

When you see it throw a mass off into the distance, it’s best to drop what you’re doing and go towards it. Take out the enemy that spawns from the mass as soon as you can.

If you ignore the enemies that spawn from the masses for too long, you will get overrun very quickly! Do your best to take them out while avoiding Bonemass itself, and also make sure to stay out of the water to avoid any potential Leeches.

Keep up the pressure and don’t get too greedy for damage. Eventually, Bonemass will go down, and you’ll be rewarded with the Wishbone that can find Silver Ore in the Mountain biomes for you.

That concludes our boss guide on how to summon and beat Bonemass in Valheim. If you have any other tips or questions, let us know in the comments below!