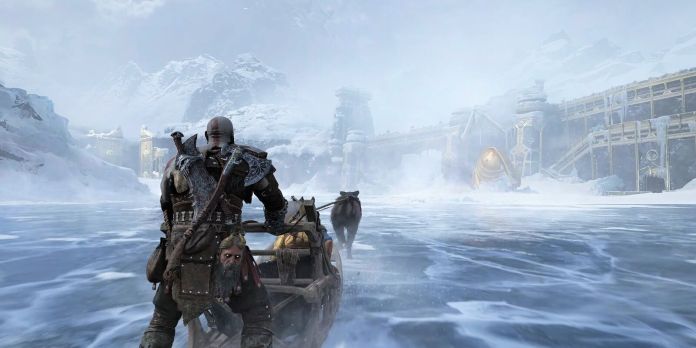 God Of War Ragnarok is an incredibly captivating action-adventure game released exclusively for Playstation consoles. The actions of Kratos and Atreus in the previous part brought the beginning of Ragnarok closer, which, of course, did not please the Norse Gods. And now the Ghost of Sparta and the young god Loki will face even greater dangers. To cope with all the difficulties, the heroes will also use the powerful weapons forged by the dwarf brothers. And in this guide, we will tell you where to find the Fortified Frost Knob for Leviathan in God Of War Ragnarok.

In God Of War Ragnarok, as in the previous part, Kratos will use the Leviathan Axe. It is an undeniably powerful weapon that is as powerful as Mjolnir. However, from the start of the game, you will have to upgrade both Leviathan and Blades of Chaos from scratch. It is, of course, a little frustrating, but it is a decision of the developers, so whatever.

Related: Will God Of War Ragnarok Be On PC? – Answered

Players can upgrade weapons and equip runes and attachments to make them stronger. In this way, you can change the weapon stats and abilities to suit your playstyle. And one of the first upgrades you will find in the game will be the Fortified Frost Knob.

It is an upgrade that, in addition to increasing damage, also adds a special ability called Frost Resolve. By holding Triangle, you can Frost Awaken the Leviathan, and increase Defense and Stagger Resistance. At max level, Fortified Frost Knob has Strength 29 and Cooldown 34.

Where to Find the Fortified Frost Knob

As we said earlier, you will be able to get this upgrade during the first quests. While doing The Quest for Tyr, you will have to face a mini-boss named The Hateful. After you win, check the chest in the room to get the Fortified Frost Knob.

That’s all you need to know about where to find the Fortified Frost Knob in God Of War Ragnarok. Follow our advice, and you will be able to get this upgrade easily. And while you are here, take a look at our guide on how to move the Fallen Pillar at the Shrine of Tyr.