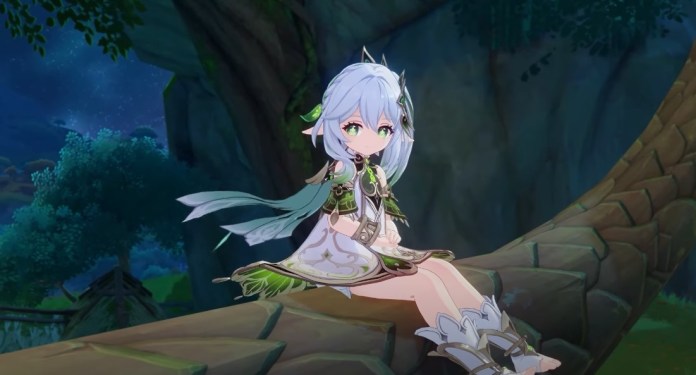 Genshin Impact 3.2 update introduced the adorable Dendro archon, Nahida, as a playable character. Players have known about Nahida since patch 3.0 and have wanted to play with her ever since. Like almost all other archons, Nahida is also a supporting character. This Genshin Impact guide will help you build Nahida.

Nahida is a Dendro character who wields catalyst. Her entire kit is focused on supporting her teammates. Nahida’s elemental skill, All Schemes to Know, links enemies with karmic bonds, which deals Dendro DMG when elemental reactions are triggered on the targeted enemies.

Nahida’s elemental burst, Illusory Heart, manifests a massive court that provides different benefits based on the number of Pyro, Electro, or Hydro characters in the party. Her burst itself does no damage to enemies, just like Barbara’s burst.

Nahida can be played as an on-field and off-field character in Genshin Impact. At Constellation 0, we recommend playing her as an off-field support character for teams based on Dendro-reactions like Aggravate, Hyperbloom, etc.

A Thousand Floating Dreams is Nahida’s best-in-slot weapon in Genshin Impact. Players can also use weapons with Crit stats on Nahida, such as:

Nahida’s strength lies in her total Elemental Mastery. Players are recommended to use Sands, Goblet, and Circlet with Elemental Mastery main stat on Nahida. As for sub-stats, Nahida will benefit from Crit Rate, Crit DMG, and Energy Recharge.

This wraps up our quick Nahida build guide. If you have questions about Sumeru’s archon, Nahida, feel free to ask in the comments!

Related: How To Get To Dendro Hypostasis in Genshin Impact

Viral Instagram Video of Mothers Relaxing in Batu Kali, Even Dropping into the Fall