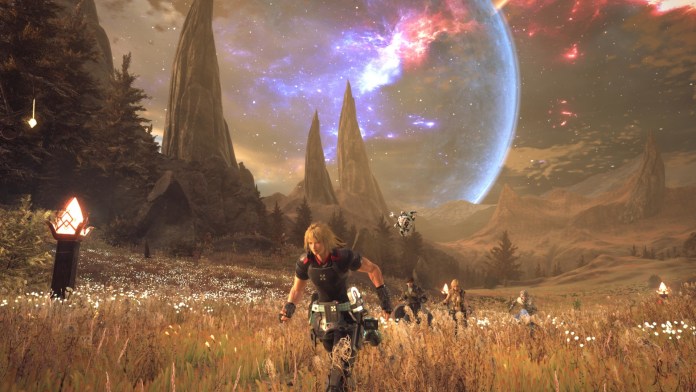 Star Ocean: The Divine Force is an incredibly addictive action RPG available for consoles and PCs. In the game, you have to explore a huge open world along with a team of different charismatic Characters. For the first time in the series, you will be able to move freely in three dimensions. And in this guide, we will tell you about all the playable Characters in Star Ocean: The Divine Force.

In Star Ocean: The Divine Force, players will find many new features. At the beginning of the game, players can choose the main character from two different options. The first is Raymond Lawrence, and the second is Laeticia Aucerius.

But like previous Star Ocean titles, you’ll be able to find new companions during your adventure. There are a total of 10 different playable Characters in Star Ocean: The Divine Force. Each of them has a unique backstory and motivation. You can upgrade each of them and equip them with different weapons, armor, and accessories. But let’s take a closer look at each playable Character.

This is one of the two main characters in the game. Raymond is the captain of the starship Ydas. In battle, he uses a two-handed sword and various scientific and technical skills.

She is the second main character in the game that players can choose from. Laeticia is Kingdom of Aucerius on the planet of Aster IV. She uses a pair of blades and attacks enemies with quick strikes.

Albaird is the loyal knight of Princess Laeticia. Out of concern for the princess, he initially does not trust Raymond. However, over time, he changes his mind. He uses Chakram to attack enemies from a distance.

Elena is a loyal friend of Raymond Lawrence and the first officer of the starship Ydas. At first, she will separate from Raymond, but after a few hours in the game, you will be able to unite again. She uses a variety of special weapons, such as whips, scythes, spears, etc.

Nina is the medical assistant on the Aster IV. She is studying healing magic to find a cure for a deadly killer. Her weapon is the handbell, but her role is, of course, to keep her allies alive.

This character, like Nina, was born on Aster IV. He is a brilliant engineer that was expelled from Aster IV for neglecting the laws. Midas uses symbology spells to deal massive damage to enemies. But casting spells takes quite a long time.

This character is the leader of the Trathen of Nihlbeth. She is familiar with Midas and Laeticia, so she will gladly join the party. Her favorite weapon is brass knuckles.

She is a person with an unsurpassed sense of responsibility. Marielle can fight with both melees and ranged weapons. And adhering to her principles, she will join the main characters on Aster IV.

This character is only available to players who have chosen Laeticia at the start of the game, as he is Laeticia’s cousin. In combat, he uses a halberd. He can also deliver ranged attacks using shockwaves.

This character is only available to players who have chosen Raymond at the start of the game. His entire body is fully mechanized. J.J. uses a katana to deliver powerful charged attacks or lightning-fast counterattacks.

That’s all you need to know about the playable Characters in Star Ocean: The Divine Force. From these Characters, you will be able to assemble a powerful party and defeat all the enemies in the game. And while you are here, take a look at our top 5 Nintendo Switch RPG Games.

Crusader Kings 3 – How to Take Land

The Callisto Protocol could be banned in Japan, but that bodes well for its vision